Around the “O” – The Roots of Omaha as a City

It’s always a good idea to know a little about the city you live in.  Although virtually everything has changed since the early days of Omaha, that original entrepreneurial spirit still runs strong here today.

Council Bluffs is actually significantly older than Omaha, although still far smaller.  Council Bluffs was originally given its name in 1804 when Lewis and Clark passed through and met with the Otoe tribe of Native American Indians.  The Omaha area began being settled by illegal land speculators as early is 1840.  After a treaty with the Omaha tribe in 1854, the already growing settlement celebrated the legal opening of new territory with a picnic on Capitol Hill, which is the present location of Central High School.

Land speculation was the most significant industry in the early days of the city.  In 1857, the economic panic resulted in the failure of all but one bank and losses for the land speculators.  But Omaha survived and continued to grow, aided by the installation of telegraph lines, and then eventually the development of a coast-to-coast railroad passing through the city.  At that time (in the 1860s), Omaha experienced a rail boom, which consisted of a primarily male population increase.  This resulted in the development of bars, gambling houses, etc.; plus the growth of brick manufacturing, breweries and smelting.

Since those early days when Omaha was known as a dirty and bad city, residents and city government members saw to the needs of infrastructure and transportation (including cable cars and street quality improvement).  Woes and trials for the place continued, with underground economy, political scandals, tornadoes and more.

In the early 1900s, with the founding of Omaha University, Omaha began to rid itself of its image of corruption and filth, becoming a center for industry.  By the 1930’s, the city was rising to be a leader in meatpacking.  Then in the 40s, Offutt Air Force Base became a base for US Strategic Command, assisting Omaha further in improving the image of the place. 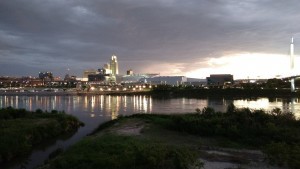 And then, of course, the College World Series being held in Rosenblatt Stadium put Omaha on the modern-day map across the country in the 1950s.

Now, Omaha still possesses that rampant entrepreneurial spirit, but perhaps in a different light.  Many businesses have started and flourished here.  And if yours is one of those, congratulations!

Like most businesses in modern-day Omaha, you might be looking for ways to improve the efficiency of your heating and air conditioning systems.  Let’s talk about how we can work together.